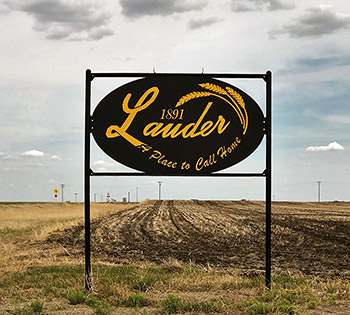 The surrounding prairie farm land finds a small community keeping its roots alive through their community centre that hosts many activities over the seasons it keeps a good social live for the members of the area.
They have kept their local school functional, as a restaurant and post office. The food is scrumptious and the hospitality is very friendly.

More about the Lauder Community

The Lauder Community Inn is the hub of the community for the Lauder area.
It serves all ages in a variety of different ways. It provides a Postal Outlet for the community which is well used and includes mail services for Maple Grove Colony close by and, with the increase in online shopping, has become an important means of receiving parcels.
We are able to use the "Inn” to hold meetings, Sunday School, crafting events, exercising, "leave a book, take a book” and enjoying recreational time. It houses a piano, pool table, meeting room, and coffee shop/convenience store. We are also able to enjoy the fellowship of lunches together a few times per week.
The community is mainly an agricultural area, both mixed farms, grain and cattle farms. We are pleased to say that we work amicably with our very good neighbours, Maple Grove Colony, that is close to our town.
The "Inn” can better be described if we look at the bigger picture of Lauder. Though the population of the town of Lauder has dwindled to only four people, six people at certain seasons, the surrounding community continues to thrive. We have an enviable array of age groups, from young families, to senior residents, who have chosen to remain in the community.
Young people work comfortably with the older adults at events, and we are thankful for the exposure to all ages that they receive.
The community also has a community hall, and a United Church that are still active and viable. We are proud to say that we are still able to operate a Sunday School which has about ten members currently. The hall is used for funerals, or funeral lunches and many other rentals over the course of the year.
The Lauder Ladies Group supports the community by holding two Rummage Sales annually, and a Tea in Support of Cancer Care – also annually. A community Pot Luck supper is held at Christmas. We often feed one hundred people or more at this event. We host a Terry Fox Walk in September, and a wiener roast and fireworks for Canada Day.
All small towns are struggling, and it is a constant struggle to keep the "Inn”, which is the hub of our community, in operation. The costs of heating and upkeep etc. are formidable.
With our kids attending school in larger places, it is challenging to provide them with appealing opportunities in a smaller place like Lauder. We like to provide as much for them as possible. We have a small playground area behind the "Inn” as well as the pool table inside and a softball diamond on the grounds which doubles as an outdoor skating area in winter when possible.
Written by June Timms
March 21, 2019

The town of Lauder did not come into being until after the arrival of the railroad in 1891. The first settlers however came into the district eight to ten years earlier. The first one to settle into the area that is now Lauder, was W. J. Higgins.
The first post office for the district as established in the home of W. J. Higgins in 1884 and was known as the Melgund post office. Before that, people got their mail from Brandon or Souris by anyone who happened to make a trip there. It closed in 1889 but there were post offices in Hartney and again Lauder, after the railroad was built.
The first school was built and opened on July 11, 1884. It was named the Rose School, later renamed Melgund School. There were multiple schools built in the years to follow.
There are conflicting reports on the naming of the town. One report says that it was to be called Bradford and another that it was to be called Rochester. In any event, the C.P.R. named it Lauder after the Venerable Archdeacon John Strutt Lauder, Rector of Christ Church in Ottawa.
Lauder was very well established for many years, but it slowly began to dwindle as the farm population grew smaller as well as transportation evolved. There two factors are the main factors as to why many prairie towns became nearly extinct to this day.
Sources: "The Rise and Fall of a Prairie Town" by Gordon G. Phillips
Hartney Rink
Schedule
Municipality Administration
Campground
Booking
Grassland
News
Westman
Regional Library
Scroll Up